In my recent blog posting, “US Debt Uncertainty — What To Do?” I recommended planning for sufficient “liquidity” — or sufficient available cash — so you’re never forced to sell long-term investments to cover near-term expenses. On the other hand, too much liquidity can dampen your investment returns. As in the natural world, financial liquidity calls for the right conditions. You want your assets to flow — but neither evaporate nor freeze due to the forces of interest rates and inflation.

Since the onset of the financial crisis in late 2007, the Federal Reserve has tried to fuel economic growth by cutting interest rates. Economists can debate how well that policy is working, but in the meantime, let’s explore what the low interest rates mean to Average Joe (or Jill) Investor.

Consumers, businesses, and government all benefit from low borrowing costs. On the other side, savers and investors earn almost nothing on their cash balances. This has been the case in most months since 2008, when the Fed cut short-term interest rates to near zero. Worse yet, investors are actually losing wealth in real terms as inflation eats into their savings. The inflation-adjusted yields on short-term Treasury securities have been negative in most months since October 2010. (Nominal yields reflect the stated interest rate, while real yields are adjusted for inflation.)

To offer an illustration, if you’ve got $100 in the bank earning essentially no interest, that means, a year from now, you’ve still got $100. No harm, no foul, you may think … but think again. In the meantime, thanks to inflation, the things you could buy for $100 at the beginning of the year now cost, say, $105. That means your $100 has actually lost value in terms of its purchasing power, or “real yield.” Ouch.

Negative real yields on short-term fixed income have happened before, as shown in Figure 1. Every time the dark-blue line of real yield dropped below zero percent, we were actually losing money on our liquid assets, at least after accounting for inflation. 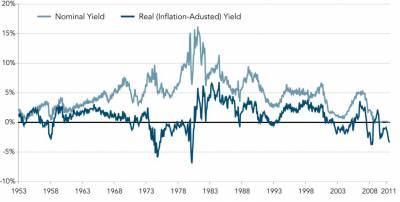 So, returning to our conditions for appropriate liquidity, the goal is to establish the right climate for your needs — neither too “hot,” with too much cash whose spending power may evaporate when exposed to inflation, nor too “cold,” with necessary assets being too hard to access. You may have a number of prudent reasons to hold cash: for upcoming spending needs, especially within retirement (typically 4–6 months); known expenses such as college; and unanticipated costs such as home repairs. But it’s equally important to recognize that you pay a real price for holding cash, particularly in our current negative-yield environment.